From time to time, when a bookish topic is provoking lots of conversation amongst us, we’ll be posting some of that discussion as a blog post.

Ang: Okay, Izabel, the first thing I want to say is that I only picked up A Court of Thorns and Roses (ACOTAR) because you told me to. I mean, not in so many words, but you were a vocal proponent of Maas’s original series, Throne of Glass, and you were pretty excited about ACOTAR. So I jumped on it when it came out, and I LOVED IT. And now my Maas feelings are…more complicated. Tell me about why you loved Sarah J Maas at that point, before ACOTAR.

Izabel: So, I read the first Throne of Glass book what feels like a million years ago. And it was just, supremely my jam. A kick-butt girl in a fantasy world. I loved the “love triangle”, the political intrigue, a lady assassin. It was just all so good. It’s wild to think about the YA (Young Adult) scene almost 10 years ago, but at the point I was pretty new to being a YA librarian so I was really diving into reading tons of YA. My sister was also in high school, so it was like a shared interest for us, plus I could wrangle her to events. We went to so many events at Anderson’s Bookshop! And all the publishers were organizing these massive tours with multiple authors. Fans would be absolutely packed in. And Maas was just like, a sparkling personality, an amazing book, it was so easy to get sucked in to being a fan. 2012 was also the year a lot of my favorites were published – Grave Mercy by Robin LaFevers and Shadow and Bone by Leigh Bardugo. Kick-butt fantasy girls were my bread and butter. 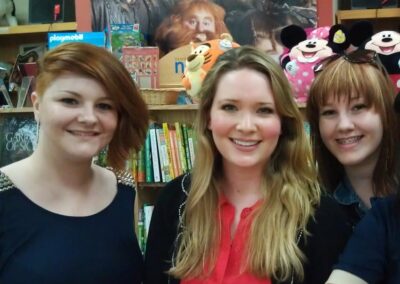 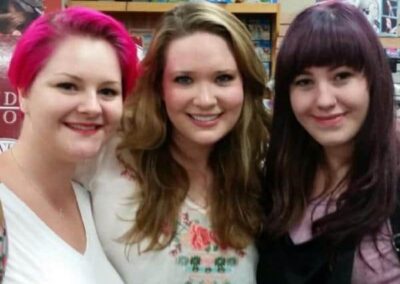 Ang: So you immediately knew you wanted to read A Court of Thorns and Roses based on that? Was Maas finished with the Throne of Glass series by then?

Izabel: At one of the book events, Maas mentioned like OHHHH I’m writing this NEW ADULT Beauty & the Beast type of story and the crowd went wild. I think this was around the time people were really trying to make New Adult happen. But then…it never really did? (A good debrief on NA can be found here!) And my conspiracy (not even conspiracy) theory is that her publisher knew she was making a lot of money in the YA market and so they made ACOTAR happen as YA instead of NA as intended. There’s also a whole conversation about women writing adult fantasy that feature young women main characters and how those are often pushed into YA instead of just being published as adult. So maybe that was part of the equation, too. I was actually kind of on the fence about ACOTAR! I think I was intrigued by this debate of whether it was YA or NA, but also the conversation centered so much on whether sex was appropriate in a YA book. And that was what actually got me to read it, to figure out if it was a YA book or not and where should it go in our collection.

As to whether Maas was done with Throne of Glass….the answer is no, LOL. If I recall correctly, I think ACOTAR came out around the same time as the middle of that series, the fourth Throne of Glass Book, Queen of Shadows. There’s 7 total Throne of Glass books now, and ACOTAR was originally a trilogy but now there’s two additional books, and probably at least one more if not many. And to be honest, reading both of the series made me confused about which book was which because there were so many similarities!

Ang: So before we start talking about reading the books, I just want to say that the concept of New Adult was extremely new to me at the time; ACOTAR actually came out before I started my job as a fiction librarian here at Oak Lawn. I think you explained all this to me, and that also made me super interested in reading Maas. I was (and still am!) a big-time romance reader, and to me, ACOTAR sounded like a romance. A fantasy romance, but still a romance. Possibly YA, possibly not. But romance.

Izabel: Yes! And I think I vaguely recall a conversation about romance in YA and how most YA books have SOME romance, but probably aren’t considered traditional romance, like could you really have a Happily Ever After (HEA) when your characters are under 18?

Ang: I remember that conversation! And what I did was, I DEVOURED A Court of Thorns and Roses. It was like…candy for me. I couldn’t stop reading it. I loved everything about it. The world-building! The fairy-ness of it all (the main characters are High Fae!), the vague resemblance to Beauty and the Beast. The romance of it. It wasn’t a Happy Ever After, but I felt very much like an HEA would happen at some point in the series (and I wasn’t wrong!) It was extremely my jam from beginning to end. I couldn’t WAIT for the next book in the series. But I don’t think you felt the same.

Izabel: LOL NO. It’s not that I don’t like faerie books, I just. What I loved about Throne of Glass was the very like, Game of Thrones vibe. Like it’s fantasy but not Superbly Magical Fantasy. And as that world starting growing and getting to be more about like very old faerie superpowers taking over the known world, I was just not that into it anymore. It’s wild to think that I went from going to every book event for her earliest books to not even finishing the Throne of Glass series!

ACOTAR is like a mixed bag for me. I wasn’t a fan of the first book, but I did like the second book. It was enjoyable but not enough for me to be like release day must-purchase for my own personal reading.

Ang: Whereas I, on the other hand, bought the second and third books the minute they came out. I think the second book is still one of my favorite twists ever in a book. The way things change for Feyre…was thrilling to me. And the Happy Ever After that DOES happen was perfection to me. But here’s a thing that started happening: I started thinking by the end of A Court of Mist and Fury…. ‘Are these YA books?’ The sexy times were getting…intense. And listen, I was a teen that read romance novels, so I’m not saying teens shouldn’t read them. But marketing them as YA started to feel…odd. And by the third book, I was like, WHOA MY GOODNESS this isn’t YA that is happening here.

Izabel: Totally! And I think that’s where we see that this whole series should probably have been adult from the beginning. But publishing probably wasn’t willing to risk it. ACOTAR came out in 2015… I could be wrong, but I think if it was being published now (which, moot point since the latest book was 100% published as adult), this would definitely be adult. There have been so many acclaimed and best-selling adult fantasies centering women written by women that it’s a no brainer now. But not really 6 years ago. I cannot believe this came out 6 years ago, what is time.

I will also argue, and frequently do on librarian Facebook groups, that the first ACOTAR book DOES feel like YA to me. In my opinion, it’s not about the exact age of the character, because plenty of adult fiction books are written about high schoolers that are decidedly NOT YA. If the book at it’s core is about figuring out who you are and where you fit in the world, that’s a YA book. So Feyre in books 1 & 2 is totally a YA character and I’ll defend her right to be in YA forever.

Ang: I do want to say that I have kept reading this series; I just finished the most recent book (A Court of Silver Flames), and it was…welp, it was not in any way a YA title. I think we had originally agreed that this book should be in YA because the first series was, but you’ve decided to move it to the adult fiction section now, and phew. Because there are things in this book that are WILD. WILD. And listen, I enjoyed it, but I think the quality of this series has suffered. I’m not sure how long this series can stay original. And here’s another thing: I’m not sure who I would recommend these books to at this point. There’s an audience for them (sales prove that!), but I can’t figure out who it is. I’m mostly puzzled by Maas at this point. Oh! I just thought of an author in a similar place in my head: Diana Gabaldon. I’ll keep reading the Outlander books until she stops writing them, but I don’t recommend them to anyone. Even with the TV show. I think that’s now I feel about ACOTAR. However bad they get, however silly and repetitive…I’ll be there. But I just don’t know if they’re recommendable.

Izabel: Yeah, I think at this point, she’s got a massive fan base that will keep reading without much hand-selling from us! I think another YA comparison would be Cassandra Clare. She keeps returning to the same world, similar characters, and I don’t know that many new readers are discovering her outside the fandom.

Ang: And I think that’s fine, ultimately. I’m interested to see where else she goes, though I confess I haven’t tried to read the first book in her other adult series, The House of Earth and Blood, which is separate from her two YA series. It’s so big. And I think I’m good with keeping up with one Sarah J Maas world. I may just…watch from afar from this point on.

Izabel: I think she would need to do something different to pique my interest again. I think I liked a lot of her characters and some of her worlds, I just need… not faeries LOL.

Ang: Well, thanks for talking about SJM with me. I felt like I needed to talk about her after I finished A Court of Silver Flames!