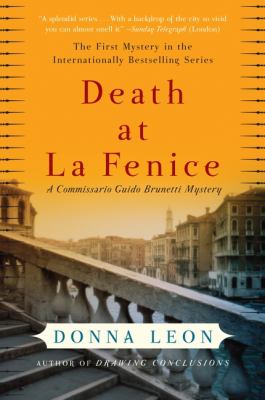 Get it: In our catalog

On Overdrive (for Media on Demand patrons only)

Death at La Fenice is one of those wonderful mystery series starters for a category of mystery I think of as “the setting is almost more important than the story”. Authors like Martin Walker (the Bruno series) or Louise Penny (the Gamache series) have turned places into characters, and that’s exactly what Donna Leon does with Venice in this book. Guido Brunetti is a detective, and a very good one; on a daily basis he deals with some not-very-good people and some very-bad-in-fact people, on the way to solving murders. There are 30 books in the series (#30 came out this spring), and in every one, there’s some form of death or dying. But interestingly, the central mystery ISN’T always a murder, and none of the deaths are written in a grisly manner. Yet, this can’t be described as cozy mystery. These books aren’t cozy. They’re atmospheric, and sometimes feel very dark indeed.

One of the other things I say about this subgenre of mystery is that they’re very cerebral. Brunetti often thinks himself out of problems. There’s very rarely action sequences; there’s very rarely any running at all. Brunetti moseys around Venice, he reads ancient Greek texts in his wife’s study, he eats and drinks a LOT of amazing-sounding food, and he thinks. By the power of his mind alone, and some deft police interviewing, he figures out the mystery. No need to shoot ’em up or chase ’em in a police boat. (There are lots of boats in these books; it is Venice, after all.) I really appreciate this aspect of these stories; a thinky detective and a solid sense of place make me very happy.

In Death at La Fenice, Brunetti is called to investigate the poisoning death of the conductor Helmut Wallauer. There are multiple suspects, and multiple motives, and it’s up to Brunetti to figure out what the answer is. Flavia Petrelli, a famous opera singer, is one of the suspects, and her complicated life makes things more complicated for Brunetti–if you continue on with the series, you’ll see her again. I can’t tell you whether the culprit is easy to suss out because I can’t lie to you: I’ve literally never figured out who did it in a mystery book before the detective reveals the truth. I’m not exaggerating. I am quite terrible at solving mysteries. But I will say that I always enjoy the way Brunetti presents his conclusions, and they always surprise me! (Grain of salt and all that.)

If you’re looking for a smart read with a fascinating central mystery, you could do way worse. And as I said, there are 29 more books after this one, so if you like Venice and Brunetti, you have a long agreeable reading path in front of you.