I love Leigh Bardugo and frequently say that I wish she was my best friend. Her Stevie Nicks inspired wardrobe and affinity for black lipstick and big crystals is a vibe I aspire to. Plus she’s created some amazing worlds and characters that I constantly find myself drawn back into. I’m in the middle of a Grishaverse re-read right now to make sure everything is fresh in my mind for the upcoming Netflix show. I can’t wait to see my favorite characters on screen, but also pick apart all the details that were different in the book (in a loving way). I own copies of all her books, including the Six of Crows duology in Polish as well as English. There are three fan art prints from the Grishaverse hanging in my living room. I, uh, may be a tad bit obsessed.

I don’t remember why I picked up Shadow and Bone, but I’m so glad I did. I’m assuming it was the Russian inspired world, as I’m a sucker (but also weirdly critical?) of Slavic fantasy. I’ve been to many, many events at bookstores with Leigh Bardugo and even had the honor to moderate a panel discussion with her and other excellent YA authors at the YALSA Symposium in 2018. 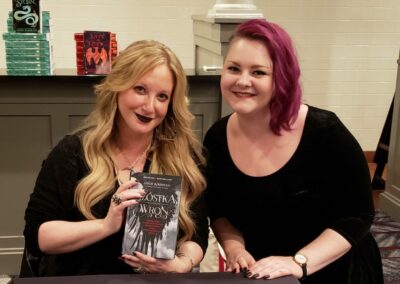 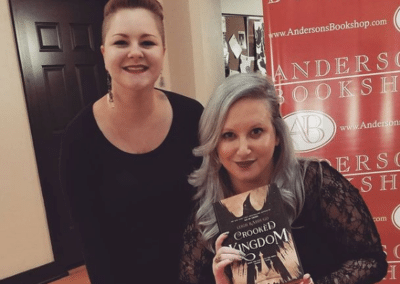 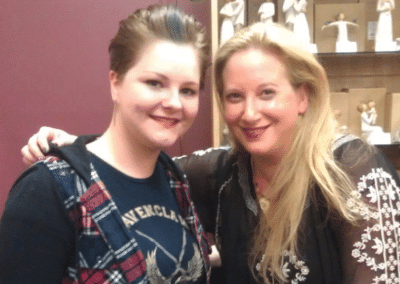 In addition to the Grishaverse books, she has written a DC YA novel and graphic novel called Wonder Woman: Warbringer, and she is now working on a sequel to her acclaimed adult debut, Ninth House.

If you want to jump right into her adult book, you totally can! It is not a part of the Grishaverse at all. It’s a dark, fantastical mystery set on the Yale campus, complete with a unique twist on the university’s secret societies. You could read this as a standalone, if you can deal with a bit of a cliffhanger, or prepare for the forthcoming sequel(s).

You may be asking yourself, Grishaverse??? What the heck is that! Grisha are the magic users in Leigh Bardugo’s invented world. Grisha have the ability to manipulate specific elements using a magical version of molecular chemistry. Her world is inspired by Tsarist Russia of the early 1800s, as well as the Dutch Republic of the 1700s, and bits and pieces of other history.

The Grishaverse has a couple entry points. Begin at the beginning with Shadow and Bone and follow Alina Starkov as she dives into the world of Grisha in Ravka. There’s a fantasy boarding school feel as the Grisha learn to hone their powers, alongside courtly intrigue, and of course a looming war. After the original trilogy (Shadow and Bone, Siege and Storm, & Ruin and Rising), you can move on to Six of Crows & Crooked Kingdom, which pick up two years later with new characters in the same world, but a new country.

The Six of Crows duology is quite a bit different from the original trilogy. The main plot in both books is a heist, and the characters are a diverse group with specialized skills, much like the cast of Ocean’s 11. You can choose to start with Six of Crows if you want to skip the original trilogy, but there will be spoilers as the events of the first three books are widely known by Kaz and his Crows living in Ketterdam.

King of Scars starts up a year after the events of Crooked Kingdom and include characters from both the original trilogy and the duology. You can start here, but much of the worldbuilding that happens in the first five books is not recapped here and that may leave you lost! This duology returns to Ravka to deal with the aftermath of the previous events, with deeper dives into the Grisha and politics as well as introductions to lesser explored neighboring countries. The conclusion to the duology, Rule of Wolves, drops March 30th.

If this doesn’t satisfy your curiosity for the Grishaverse, there are two standalone short story collections. The Language of Thorns is a great entry to Leigh Bardugo’s writing and imagination with Ravkan fairytales. The Lives of Saints is for nerdier Grishaverse fans, covering the history of various saints mentioned throughout the books.

And if none of this sounds good, pick up the YA origin story for Wonder Woman and maybe that will pique your interest in Leigh Bardugo’s writing. Happy reading!